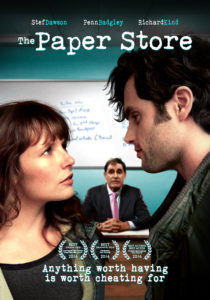 Can academic paper ghostwriting be a business?

3.5 STARS Highly Recommended by Video Librarian which wrote “Driven by virtuoso performances from its three lead actors, The Paper Store is an engrossing and sometimes explosive drama about navigating academia. Based on a play by Katharine Clark Gray (who adapted it for the screen with her husband, Nicholas Gray, the film’s director), the sharp-edged story finds college dropout Annalee (Stef Dawson) cynically exploiting her own keen intellect and writing talent by ghostwriting papers for college undergraduates.”

Annalee (Stef Dawson; The Hunger Games trilogy) is an academic ghostwriter–a freelance cheat working in the shadows of a college campus. Or rather, she was…until Sigurd (Penn Badgley; Margin Call) books her for the entire semester. He’s subcontracting his entire graduate degree. She has reservations, but he’s paying double. Besides, she can’t resist the challenge of forging a whole MFA. 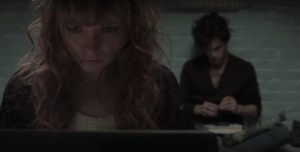 Annalee and Sigurd become lovers. But things soon turn sour. She can’t end the romantic relationship without ending the business one. Secrets start to spill. And then she learns that Sigurd has been recording their meetings. When Sigurd refuses to explain, Annalee rats him out to Professor Kane (Richard Kind; Argo). Instead of the swift justice she envisioned, however, Kane has his own idea of what should happen next. Call it extortion; call it blackmail. Whatever you call it, the ugliness is just beginning…

“Among the myriad issues sweeping our country, the gargantuan cost of higher education emerges as a (still) rising concern. With the annals of cinema relatively bereft of material on the subject, few narrative films have touched on it so pointedly or deftly as The Paper Store.” —Conor O’Donnell, Film Stage