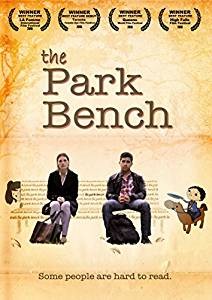 A high-strung tutor and her Hispanic student strike romantic sparks during a series of English lit lessons on a park bench.

The multi-award winning The Park Bench is an unconventional comedy romance starring Walter Perez (The Avengers, Friday Night Lights) and Nicole Hayden (Mad Men, Grey’s Anatomy) about two opposites who share their inner lives through the books they read.

When Emily, a neurotic librarian-to-be, is assigned to Mateo, a struggling undergrad, in American Lit, they do not get along. But when the discussion turns from classics to confessions, they reveal secrets that could change their lives forever. Once they’ve revealed their deepest feelings and secrets, they’re forced to make an important choice about their future.

Utilizing a colorful and whimsical blend of animation with live action, The Park Bench reveals how stories shape our lives.

“The script plays like something by an English major overstuffed with knowledge of lit but whose real-life experience is drawn largely from movies. Great cinematography” – The Village Voice