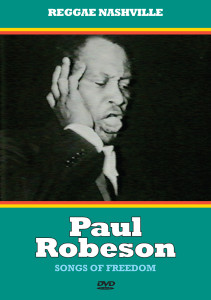 Songs Of Freedom is a documentary showcase for the great voice of Paul Robeson. The film exposes the desperate attempts of the FBI and other secret services in America to stop his playing and to discredit him. It reveals that his actual life was in danger as long as he continued along the path of international socialism.

Robeson’s career begins in England in 1927 and he was influenced by a chance meeting with Jomo Kenyatta on the set of the film, Sanders Of The River. He drew attention to the African roots of gospel music and spirituals in his repertoire.

Songs of Freedom threads Robeson’s music, political rallies and speeches in a way that throws light on 50 years of black activism in America. And while music plays an integral role in the film, it is really about aspects of Paul Robeson’s life with a focus on his ongoing fight for racial justice and his conflicts with the United States establishment.

Robeson never compromised and it put an end to his domestic career. Abroad, however, he was a hero.

Originally released in 2008, Songs of Freedom is a classic political documentary  about how music can play a role in activism and may best represent the opportunity Robeson was looking for to “give a true picture of many aspects of the life of the coloured man in the West.