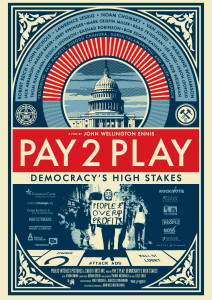 If our political system is like a game of Monopoly, how can outsiders have a voice when only money speaks?

Filmmaker John Ennis documents comical corruption, follows political newcomers, and uncovers intrigue in this colorful journey that connects the dots of Big Money in our ever-challenging election process. From billionaires meeting in secret to citizens taking to the streets, PAY 2 PLAY follows the money and connects the dots in this portrait of People Power rising.

Driven to make the world a better place for his newborn daughter, filmmaker John Ennis looks for ways outsiders can lead when our country is run by insiders and pay-to-play politics. He journeys through high drama on the Ohio campaign trail, uncovers the secret history of America’s past time, and explores the underworld of L.A. street art on a humorous odyssey that reveals how much of a difference one person can make.

From billionaires meeting in secret to citizens taking to the streets, PAY 2 PLAY follows the money and connects the dots in this powerful and well executed portrait of People Power rising that features a host of well positioned, well spoken and wonderfully creative people including Robert Reich, Marianne Williamson, Noam Chomsky, Jerry Springer and many more.

Stream it or download on Amazon Instant Video http://amzn.to/1wn1JjJ