Positive Force: More Than A Witness

Positive Force: More Than A Witness: 30 Years Of Punk Politics In Action 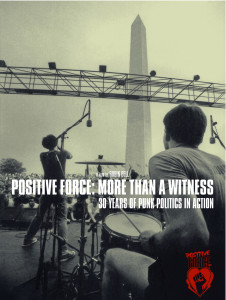 Covering a span of 25 years, More Than A Witness documents PF’s Reagan-era origins, the creation of its communal house, FBI harassment, and the rise of a vibrant underground that burst into the mainstream amidst controversy over both the means and the ends of the movement.

In the best punk fashion, PF volunteers have applied creative DIY tactics and radical critiques to issues of homelessness, racism, corporate globalization, sexism, and war while struggling to constructively address conflicting dynamics and visions within the group itself.