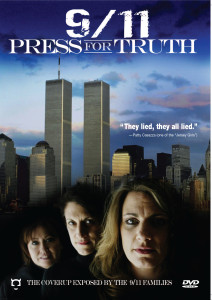 WHAT DO YOU REALLY KNOW ABOUT THE WORST TRAGEDY IN MODERN AMERICAN HISTORY? THE TRUE STORY BEHIND 9/11 WILL STILL MAKE YOUR BLOOD BOIL 15 YEARS LATER!

“One of those rare creatures in modern media: A Sept. 11 study stripped of politics and partisanship.  It’s the anti-‘Fahrenheit 9/11’!” – NUVO News Weekly

Although independent investigations began within weeks of both Pearl Harbor and the Kennedy assassination, the same was not true of the attacks of September 11th. Most people still remain unaware that formation of the 9/11 Commission was strongly opposed by many in Washington, including the Bush administration.

It was only due to pressure from the 9/11 families, led by a particular twelve calling themselves the Family Steering Committee, that fourteen months after the attacks the first hearing finally began.

The political becomes personal in Press for Truth, which examines the World Trade Center attacks

from the perspective of the families who lost loved ones.The feature documentary draws partly from Paul Thompson’s website-turned-book, The Terror Timeline. The story arc is accented by the commentary of Lorie Van Auken, Patty Casazza, and Mindy Kleinberg, three of the “Jersey Girls.”

Press for Truth exposes the gritty facts behind the events that followed the worst tragedy in American history.

“3 ½ out of 4 stars!  Let[s] the facts they’ve uncovered do the talking, knowing full well they are enough to raise the ire of any viewer.” – Hub Weekly

In Press for Truth, five of the most prominent members of the Family Steering Committee, including three of the “Jersey Girls,” tell their stories and subsequently lead a nation into the investigative process.