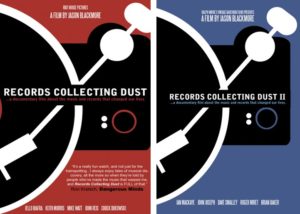 According to industry tracking firm Nielsen, Vinyl LP sales accounted for 14 percent of all physical album sales in 2017. The once nearly dead music format continues to regain momentum with over 7.6 million LPs sold between December 29, 2017 through the 28th June 2018.

According to the latest end of year report published by the Recording Industry Association of America (RIAA) physical album sales of vinyl and CDs out-stripped digital downloads in the USA in 2017. Further breakdown of physical sales provides a more complete picture: while CD sales have dropped 6%, vinyl sales have surged by 10% representing $395 million music revenues.

The renewed interest in vinyl started in 2007 and is attributable the high-quality sound it delivers vs. the compressed digital delivery available online.

RECORDS COLLECTING DUST is a two film documentary series about hardcore punk music and the vinyl records that changed lives.

“I always enjoy tales of musical discovery, all the more so when they’re told by people who’ve made the music that warped me, and Records Collecting Dust is FULL of that.” —Ron Kretsch, Dangerous Minds

Records Collecting Dust is a wonderful look at the resurgence of a business and the impact of a physical media music format that is simultaneously retro and contemporary.