Rescue in the Philippines 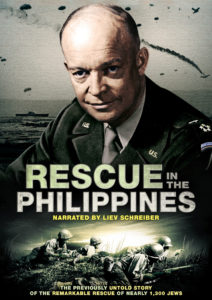 The previously untold story of the remarkable rescue of nearly 1,300 Jews…

“Fascinating…as heartbreaking as it is courageous.” – The New York Times

During the days leading up to World War II, the five Frieder brothers–Cincinnati businessmen making two-for-a-nickel cigars in Manila–banded together with charismatic first president of the Philippines Manuel Quezon, U.S. High Commissioner Paul McNutt, and an ambitious U.S. Army Colonel named Dwight Eisenhower to help nearly 1,300 Jewish men, women, and children escape the Nazis and immigrate to the Philippines.

That heroic effort and show of moral courage occurred at a time when most of the world was still reluctant to intercede on behalf of Europe’s Jews. In fact, the U.S. State Department was uncomfortable with the idea, concerned that the large wave of Jewish immigrants might use the Philippines as a back door into the U.S.

However, despite that concern and regardless of the pragmatism that may have influenced Quezon’s decision to welcome them, the rescue of those Jewish refugees has impacted generations.