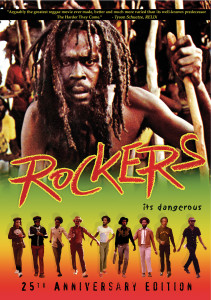 Starring Leroy “Horsemouth” Wallace and Richard “DirtyHarry” Hall, ROCKERS is a Robin Hood style story of oppressed Jamaican musicians getting even with the “mafia types” in the business.

This ‘special edition’ of the DVD includes extra materials:

”ROCKERS” is another Jamaican movie with the sparkle of ”The Harder They Come,” which it manages to resemble but not imitate. In fact, ”Rockers” is in many respects the better of the two. ”The Harder They Come” had the invaluable advantage of coming first, and the area both films cover is almost narrow enough to make a second seem superfluous. But ”Rockers” holds its ground, thanks to its funny, offbeat players and sinuous reggae score.

“Rockers” is about many of the same things the earlier film was about, though it’s slightly more polished in some technical respects. Its hero, Leroy (Horsemouth) Wallace, lives lackadaisically in Kingston and works as a drummer, if he works at all. But the Jamaican music business, which looked nasty enough in ”The Harder They Come,” is made to seem even more wicked here. Horsemouth’s drumming talents aren’t paid much heed, and when he tries to supplement his income by distributing records from the pressing plants to the stores, he can earn only 25 cents a disk. Unlike Jimmy Cliff, an angrier leading man in ”The Harder They Come,” Horsemouth simply shrugs and enjoys himself, figuring he’ll get even eventually. He does, in the film’s merry concluding sequences.

Most of Horsemouth’s Rastafarian friends are played by reggae musicians – ”rockers” is another name for reggae – and their songs are integrated very deftly into the action. The music emerges organically from the film’s small and self-contained world, and some of it is lovely – a ballad sung by Burning Spear as he and Horsemouth sit on the beach at nighttime, for instance. In another scene, the late Jacob Miller and his Inner Circle band are seen performing a deceptively gentle song about burning down the plantations, in a setting that is left unidentified. When the camera pulls back, the band is seen to be playing for wealthy white tourists, who don’t have the slightest idea what the music is about.

”Rockers” is heavily didactic about the tenets of Rastafarianism, but it’s also lighthearted, offering much the same dichotomy reggae music does. Horsemouth has a number of comic scenes with the woman he doesn’t exactly live with: she has several of his children, and all of his remarkable wardrobe, so he’s forced to come home sometimes but doesn’t do it happily. He has such confidence in his children that he’s sure they’ll grow up just fine without him, he assures their mother. Meanwhile, he ambles through a culture that is keenly, vividly etched during the course of the story. The feeling ”Rockers” has for Jamaican culture, which would seem to run deep, is all the more remarkable in view of the fact that the director, Theodoros Bafaloukos, is Greek.” – NY Times

“Ted Bafakoulos’s Rockers is rightly regarded as the best of Jamaica’s classic reggae films: being more original than the derivative gangster tale The Harder They Come, and more heavyweight than the eccentric Countryman.” – Reggae News

“Perry Henzell’s 1972 film The Harder They Come will always be the quintessential reggae movie, forever tied to the music and culture of Jamaica. But if The Harder They Come introduced reggae on the big screen, giving it a cinematic identity, then Ted Bafaloukos’ Rockers gave it heart and soul.” – DVD Talk