A Life’s Reflection at 100 Years 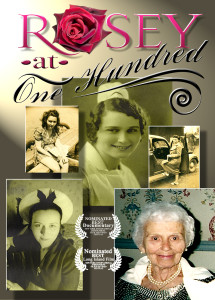 Rose Kramer was born on January 1, 1908 in Smorgun, Russia. Her father was imprisoned during the Russian “Pograms” against the Jews. Upon his release he came to the U.S. and later sent for his family.

Rose tells of her early years growing up as a bright, artistically talented Jewish girl in Ithaca. Upon graduation she came to NYC. One of the first “Feminists”, she did as she wanted and succeeded.

This intimate portrait follows the fascinating woman through her 100th year as she reflects on her life and relationships. Always a leader, Rose is once again a pioneer as we have a glimpse into what it may be like for the future generations who will probably live to be one hundred or more.