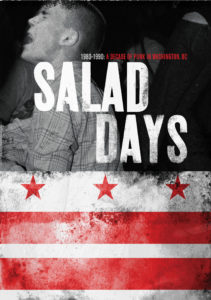 The Critically acclaimed documentary chronicling the rise of punk rock in Washington, DC., one of the most influential, enduring and political music scenes in America… told by the people who created it.

“Salad Days: A Decade of Punk in Washington, DC (1980-90)” examines the early DIY punk scene in the Nation’s Capital. It was a decade when seminal bands like Bad Brains, Minor Threat, Government Issue, Scream, Void, Faith, Rites of Spring, Marginal Man, Fugazi, and others released their own records and booked their own shows-without major record label constraints or mainstream media scrutiny.

“…Salad Days’ ‘not only acts as a musical primer but as a monument to a moment: when punk was both a way to find kinship with like-minded oddballs and a tool for fighting issues like racism and economic disparity.” – Rolling Stone

Contextually, it was a cultural watershed that predated the alternative music explosion of the 1990s (and the industry’s subsequent implosion). Thirty years later, DC’s original DIY punk spirit serves as a reminder of the hopefulness of youth, the power of community and the strength of conviction.

“The film’s powerful music and incendiary live performance footage by the likes of the Bad Brains, Teen Idols, SOA, Government Issue, Void, Faith, Marginal Man, Grey Matter, Rites of Spring, Embrace Dag Nasty, Fugazi and many others speaks for itself and is a

“4 (out of 5) Stars: Sure to remind viewers that the power has always been in their hands.” – Time Out NY