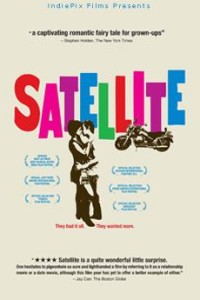 In SATELLITE, a chance encounter prompts a young couple to forsake everything they know in the hopes of truly experiencing life as never before in director Jeff Winner’s (YOU ARE HERE*) reckless romantic drama. After meeting and falling in love over the course of a weekend, Kevin (Karl Geary, THE BURROWERS) and Ro (Stephanie Szostak, IRON MAN 3, R.I.P.D., THE DEVIL WEARS PRADA, DINNER FOR SCHMUCKS) vow never to lie to each other and to dare each other to do the things they fear most.

As the new pair hastily abandon their jobs, sell their possessions, and bet everything they have on love, reality rears its ugly head in the form of a secret Ro carries—if revealed, it could destroy their relationship.