Sisters of the Wilderness 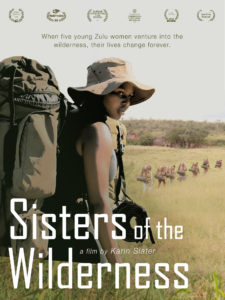 When five Zulu women gear up and go backpacking in the African wilderness, their lives change forever.

Sisters of the Wilderness is a social impact feature-length documentary set in the iMfolozi wilderness, South Africa, in the oldest game park in Africa.

The film tells the story of five young Zulu women from underprivileged backgrounds who travel into the wilderness for the first time in their lives on a self-discovery journey. The trip offers them an opportunity to grow and heal, and serves as a reminder that we are intimately linked to nature. What we do to her we also do to ourselves.

Each of the women on the excursion is burdened with her own painful history and they find themselves on a physical border that separates civilization and nature, as well as a psychological one that draws a line between their past and their future.

The film additionally explores the plight of the primordial iMfolozi wilderness which is severely threatened by an open-cast coal mine on its border, and the dire rhino poaching in this park, which is experiencing the highest rates of poaching in more than a century.

The film follows the women as they walk in big game country and camp under the stars, totally surrounded by wild animals. Exposed to the elements and carrying on their backs all they need for the journey, they face emotional and physical challenges, and learn what it takes to survive in the wild.

“Argues, quietly and persuasively, that another world is still possible.” —Dan Moshenberg, africasacountry.com

“We want to ‘transfer’ the audience to an ancient place where no barriers separate human and nature,” stated creator / producer, Ronit Shapiro, whose experience in the iMfolozi wilderness and a meeting with South Africa’s legendary conservationist, the late Dr Ian Player, inspired her to make this film. “A journey into wilderness is an intense experience where one can expect to undergo a personal transformation.”