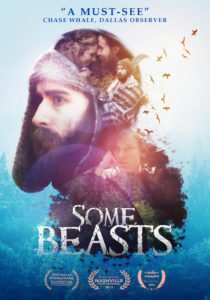 Working in an insular farming community in Appalachia, Sal Damon, a modern-day Thoreau, seeks solace from a past relationship. After a sudden death in the community and the discovery of a feral child living on the lam, Sal must reconcile his place in a world that lives outside of the law.

A multi-award winning film, Some Beasts has earned its place in acclaimed independent cinema with wins at:

The film is built around the emotional journey of Sal (Frank Mosley, in one of his best performances to date), the caretaker of several farms in a small Appalachian community. Like his group of friends whom he visits regularly, Sal is a back-to-the-land type, and has dreams of building a home and raising a family on the piece of land where he lives.

Hammer on Nail wrote “Regional films with this sort of depth and artistry are a welcome addition to the canon of American Independent Cinema.”

“A MUST SEE” – Dallas Observer