Spirit of the Bull 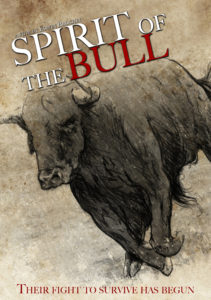 They fight to survive… and they also run free…

Spirit of the Bull is the story of a brutal and blood-thirsty fighting bull named El Toron, known to have gored two matadors during an epic bull fight in Old Mexico. Though a famous matador eventually felled the mighty beast, El Toron’s story of blood, blades and freedom has become legend.

Born and bred for his aggression, the once wild and true native Spanish bull bloodline found in El Toron lives on today in his offspring who still battle merciless matadors in bull fighting arenas throughout Mexico.

In a strange paradox, this ferocious bloodline can also be found in the tranquil mountain regions of the interior where direct descendants of El Toron now roam in wild herds. News of El Toron’s death caused such a distraction that the ranch hands left the herd unattended. The bulls escaped from captivity in the late 1930’s only to re- establish themselves as the feral, free and majestic creatures they were created to be. His story of blood, blades and freedom will now be told!