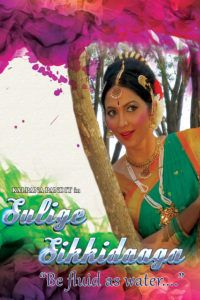 SULIGE SIKKIDAAGA ‘ Be fluid as water’ is a magnificent tribute to the power of the human spirit to triumph over adversity!

With a special focus on Women’s Empowerment, the film presents the story of one young woman whose life begins to spiral out of her control. When it does, she faces the choice of following but one of two paths.

The film also brings awareness to the medical condition of grand mal epilepsy.

Woven with a taut and brilliant screenplay, filmed in cinematically beautiful locations in and around Bengaluru, India, Be Fluid as Water features a stunning finale in Tucson, Arizona.

“An Indian film that uses a Sliding Doors-style narrative to send an empowering message…” – Film Threat. It is effectively a “PSA for women’s empowerment and epilepsy awareness.”

“The film is a tribute to women empowerment that shows the heroine as a perfect example to overpower all obstacles, difficulties and stand on her own feet.” – DaijiWorld

Written by Scott Barker and starring Kalpana Pandit, Vivek Punjabi, Lalitha Rajagopal, Clement Sequeira, Akash Hora and Cliff Janke, the production is the work of House of Pandit, and directed by Sundeep Malani.