The Kingdom Of Zydeco 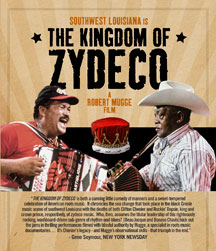 THE KINGDOM OF ZYDECO looks at the black Creole music scene of Southwest Louisiana and at attempts, in the mid 1990s, to name a new “king of zydeco.” The music’s original self-proclaimed “king” was the great Clifton Chenier who did more than anyone to develop zydeco’s musical form and to promote it around the world. After Chenier’s death, his good friend and former “crown prince” of zydeco Rockin’ Dopsie was crowned king by the mayor of Lafayette, Louisiana under somewhat controversial circumstances. Then, with Dopsie’s death, a new struggle ensued to crown either veteran accordion player Boozoo Chavis (another of zydeco’s founding fathers) or the younger Beau Jocque (at the time, Southwest Louisiana’s most popular musical artist).

The core of the film is a joint concert appearance by Boozoo Chavis and Beau Jocque, which was billed as the event that would determine zydeco’s future king, along with efforts by the Louisiana Hall of Fame to crown Boozoo Chavis in accordance with the reputed final wishes of Rockin’ Dopsie. Also shown performing in the film are respected bandleader John Delafose and the talented younger artist Nathan Williams of Nathan and the Zydeco Cha Chas. But the film is as much about storytelling as it is about performance, and the tall tales come not only from musicians but also from competing nightclub owners Kerman Richard and Sid Williams (older brother of Nathan), from zydeco deejay Lester Thibeaux, from zydeco record store owner Irene Hebert (sister of Lester), from Zydeco Association heads Wilbert Guillory and Paul Scott, and from Louisiana Hall of Fame founder Lou Gabus. Appropriately enough, the film’s climax documents the actual crowning of a new zydeco king, though that crowning, too, was immediately contested, and Mr. Delafose, Mr. Jocque, and Mr. Chavis all passed away much too soon afterwards.

In the end, we are left with a stunning record of the talented musicians and colorful characters who made up zydeco’s true Golden Era.

Transferred to HD from the original 16mm film and lovingly restored

“THE KINGDOM OF ZYDECO is both a cunning little comedy of manners and a sweet-tempered celebration of American roots music. It chronicles the sea change that took place in the black Creole music scene of southwest Louisiana with the deaths of both Clifton Chenier and Rockin’ Dopsie, king and crown prince, respectively, of zydeco music. Who, then, assumes titular leadership of this righteously rocking, washboard-driven sub-genre of rhythm-and-blues? A colorful, engaging cast of disc jockeys, club owners, record dealers and other zydeco artists have their own opinions and biases in the matter. The Chavis-Jocque tussle is prototypical American status buffoonery painted in folk-miniature. Both these men kick out the jams in thrilling performances filmed with blissful authority by Mugge, a specialist in roots music documentaries such as 1991’s DEEP BLUES. It’s Chenier’s legacy – and Mugge’s observational skills – that triumph in the end.” – Gene Seymour, New York Newsday

“Musical performances are easy to film; the evolution of a musical style is trickier, and hardly ever conveyed well. THE KINGDOM OF ZYDECO does both, and with a beat.” – Robert Hunt, Riverfront Times (St. Louis)

“More colorful characters than all of Hollywood’s summer offerings combined. And that’s not even mentioning the cornucopia of musical highlights, which will put zydeco fans in seventh heaven, and turn the uninitiated into foot-stomping devotees.” – Larry Worth, New York Post