The Pitch: Passing the Hat for a Living 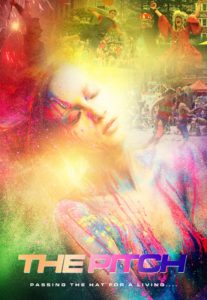 What is a “Brusker”? According to Merriam-Webster, a brusker is a ‘street performer’; a person who entertains in a public place for donations. Street performance or busking is the act of performing in public places for gratuities. In many instances the rewards are in the form of money but other gratuities such as food, drink or gifts may be given. Brusking is practiced all over the world and dates back to antiquity. It is also, in contemporary times, used by performers as a way to get discovered.

“The Pitch” takes a look at the world of international street performing bruskers to find out why these men and women have chosen to “pass the hat” to make a living, along with the challenges they face.

The fast-tracked project was filmed over the summers of 2015 and 2016 documenting busker performances and interviews during the 25th and 26th edition of the Buskers on The Bay Festivals.

Buskers featured in the film hail from Australia, England, the US and Canada, providing a broad spectrum of performers. The film is produced by Jim Kuehnel with Mark Berry and Duane Farley as Executive Producers.