“Joel Gilbert takes a serious theme–how socialism (disguised as progressivism) threatens to destroy our freedom and prosperity and fashions it into an imaginative, creative, biting and yes, genuinely funny movie. There’s No Place Like Utopia manages to be both instructive and entertaining. It should be to the current elections what Dinesh di Souza’s documentary 2016 was to the 2012 elections, only this time, given the very different atmosphere, Gilbert’s film could have a real political impact.” —Rael Jean Isaac, The Wall Street Journal 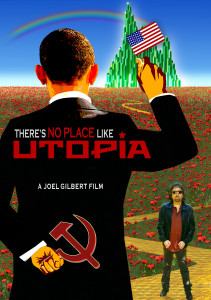 Filmmaker Joel Gilbert travels across America confronting progressives, and finds out they are regressing.

Why did Dorothy follow the yellow brick road? Film maker Joel Gilbert journeys across America to find out what’s at the end of the Progressive rainbow – Utopia or something far worse? From the ruins of Detroit to the slums of Chicago’s South Side, and from Denver’s illegal immigration invasion to Newark’s urban removal project, Gilbert pulls back the curtain. He confronts Progressives on his quest, and takes us deep into their political fantasy of paradise on earth.

There’s No Place Like Utopia is a humorous and horrifying exploration of Progressivism, amnesty for illegals, race relations, Islam in America, political correctness, and Barack Obama himself, who promises to “remake the world as it should be.”

But is Utopia a real destination for America? Or, does the true path to happiness still remain faith, family, and hard work – back home in Kansas?

“A great message to America accomplished with remarkable wisdom, dogged determination and exceptional patriotism. This film can turn the tide of progressive destruction. This movie needs to be seen by every American.” — General Charles Jones III, US Air Force (ret)

Public Performance and Digital Site Licenses are available exclusively through Soundview Media Partners. To inquire or to place an order, write to info@soundviewmediapartners.com or select from the license options below…