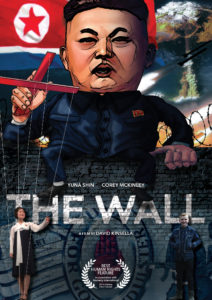 Filmmaker David Kinsella thought he was going to North Korea to make a documentary.

The North Korean regime thought that he would let them dictate the terms of his film.

The result is a hybrid documentary / feature narrative that exposes the North Korean regime and its oppression of human rights through the voice of a young female poet.

“Mixing gritty naturalism with hallucinatory hyperrealism, The Wall features a bold mix of styles, imaginatively and powerfully conveying its messages about tolerance and the dangers of ideology taken to a brutal extreme. HIGHLY RECOMMENDED” – Video Librarian (3.5 stars)

Kinsella had to change his strategy, under the pressure of the North Korean Sensor Department and thus filmed The Wall in a way that animation could be painted onto the images and used to tell the real story in post-production when he returned to Norway.

Understanding that in North Korea “All foreigners are spies and evil.” something Kinsella had been taught as a boy growing up in Northern Ireland, he also draws comparisons with his own childhood in Belfast, and his North Korean adventure.

The result is The Wall; the story of Yung Hee, played by Yuna Shin (All that Remains), a young female poet living under North Korea’s regime that’s told through a mix of live action and animation.

“…a multicultural production, shot in North Korea and Belfast, with Norwegian animation and a script penned in Amsterdam by Klaas Bense. This diversity is apt considering the nature of the story, a globe-trotting comparison piece that serves to highlight the universal nature of human experience in spite of cultural and political differences” – Film Ireland

Personal use copies of the DVD are available on Amazon: https://amzn.to/2I8Fety