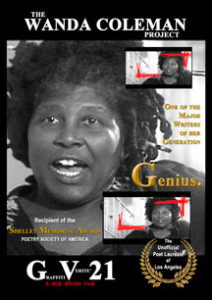 “The Wanda Coleman Project: Genius” is a must-see filmed interview (and more) if you’ve ever loved the writings of Wanda Coleman or if you’re interested in finding out what her beautiful life, poetic conceptual process and philosophy of creative writing was all about. The DVD includes interview plus Poetry Readings for 80 minutes of raw, unadulterated magic!

Wanda Evans (1946-2103) was born in the Watts neighborhood of Los Angeles, where she grew up during the 1950s and 1960s. She is the eldest of four children. Her parents were George and Lewana (Scott) Evans, who were introduced to one another at church by his aunt. In 1931, her father had relocated to Los Angeles from Little Rock, Arkansas, after the lynching of a young man who was hung from a church steeple. He was an ex-boxer and long-time friend and sparring partner of Light Heavyweight Champion Archie Moore. In Los Angeles, he ran a sign shop during the day and worked the graveyard shift as a janitor at RCA Victor Records. Her mother worked as a seamstress and as a housekeeper for Ronald Reagan, among other celebrities.

Shortly after finishing high school, she married white Southerner Charles Coleman, a troubleshooter for the Student Non-Violent Coordinating Committee (SNCC) in the 1960s. Their union produced two children, Luanda and Anthony. She went on to marry two more times. Her third husband was poet Austin Straus, whom she married in 1981.

Coleman received fellowships from the John Simon Guggenheim Foundation, the National Endowment for the Arts, and the California Arts Council (in fiction and in poetry). She was the first C.O.L.A. Literary Fellow (Los Angeles Department of Cultural Affairs, 2003). Her honors included an Emmy in Daytime Drama writing, the 1999 Lenore Marshall Prize (for Bathwater Wine), and a nomination for the 2001 National Book Awards (for Mercurochrome). She was a finalist for California poet laureate (2005).

Not without controversy… While critically acclaimed for her creative writing, Coleman’s greatest notoriety came as a result of an unfavorable review she wrote in the April 14, 2002, issue of the Los Angeles Times Book Review of Maya Angelou’s book A Song Flung Up to Heaven. Coleman found the book to be “small and inauthentic, without ideas wisdom or vision”. Coleman’s review provoked positive and negative responses, including the cancellation of events and the rescinding of invitations. Her account of this incident appears in the September 16, 2002, edition of The Nation.