Where the Streets Have No Name 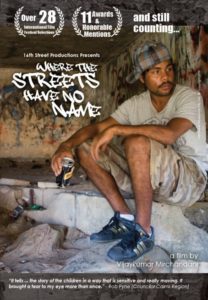 Vijaykumar Mirchandani’s “Where The Streets Have No Name” is an emotional journey and redemptive story seen through the eyes of one man who has been working tirelessly for decades trying to help alleviate youth homelessness in Cairns, Australia.

The social issue is not limited to one city or one nation. It is a world-wide problem. In the U.S., it has reached epidemic proportions and is reported to have surpassed 550,000 according to the 2016 report by Social Solutions. More frightening, the report estimates that 380,000 teens (under 18) have experienced a homeless situation of 1 week or more.

“Where The Streets Have No Name” is an intimate and unforgettable journey that reveals a truth which most people choose to be oblivious of, turning a blind eye to those homeless teens that cross their paths.

At the core of the film’s narrative story is Dr. Harald Falge, a German expatriate who migrated to Cairns for a better life, but adopted the issues as his own. He has been working for 20+ years on the issue of homelessness in Cairns with his organization Street Level Youth Care.

The multi-award winning film provides a highly insightful experience into homelessness as it delves into the lives of street kids, presents their stories and unfolds the bitter realities of their lives. Backed with real life incidents, diverse stories and first hand interactions with key people who have played an integral part in making the mission successful transforms the documentary into an inspiring tale.

Critically acclaimed around the globe, “Where the Streets Have No Name” has played in 28 festivals earning 11 awards & honorable mentions. Some include:

IN HOME/PERSONAL USE COPIES AVAILABLE FROM AMAZON: http://amzn.to/2BbncXo