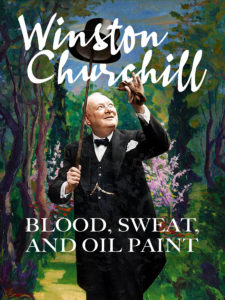 Commemorating the fiftieth anniversary year of Churchill’s death, Andrew Marr (History of Modern Britain, BBC News at 10, Doctor Who) discovers the untold story of Winston Churchill’s lifelong love for painting. During the course of production, he meets with the Prime Minister’s descendants and explores the connections between Churchill’s private passion for painting and his public career as politician and statesman.

Marr additionally explores Churchill’s passion for painting as a form of therapy, relating it to his own process of recovery from a stroke.

Marr interviews Churchill’s granddaughters Celia Sandys and Emma Soames, who recall how serious their grandfather was about painting. The studio at Chartwell was every bit as out of bounds for the

grandchildren as the study, so much did Churchill dislike being interrupted while working. Celia explains that her grandfather became completely absorbed in his canvas while painting and that the grandchildren learned not to disturb him at these times even though they knew their grandfather loved them dearly.

Also interviewed by Marr is Churchill painting authority David Coombs. Together they discuss how much time Churchill spent in the company of the great English painters of his era such as William Orpen and John Lavery, and how immensely Churchill respected these artists, who in turn respected him because they understood how seriously he approached painting. 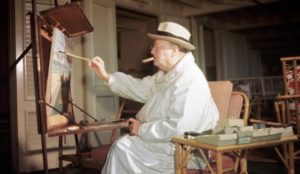