Yesterday Was A Lie 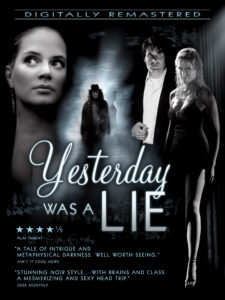 The most powerful force in the universe lies within the depths of the human heart.

Produced by a non-profit arts foundation (Helicon Arts Cooperative) and released 10 years ago, YESTERDAY WAS A LIE (now remastered by the Director) has gone on to receive over a dozen film festival Best Feature awards and critical praise.

Kipleigh Brown “exudes Bacall” (Slice of SciFi) as Hoyle, a girl with a sharp mind and a weakness for bourbon who finds herself on the trail of a reclusive genius (John Newton). But her work takes a series of unforeseen twists as events around her grow increasingly fragmented… disconnected… and surreal.

With a sexy lounge singer played by Chase Masterson (who also Produced the film) and a loyal partner Mik Scriba as her only allies, Hoyle is plunged into a dark world of intrigue and earth-shattering cosmological secrets. Haunted by an ever-present shadow (Peter Mayhew) whom she is destined to face, Hoyle discovers that the most powerful force in the universe- the power to bend reality, the power to know the truth- lies within the depths of the human heart.

“This ambitious film is a stunner, nothing less than the arrival of a major filmmaker”  – KGO Radio / Flick Nation.

“Donnie Darko meets film noir, with a heavy dash of Lost, Kiss Me Deadly, and pretty much anything from David Lynch. A cult gem waiting to be found.” – IGN

“Kerwin bravely mashes up genre conventions and styles to create his unique vision — imagine mixing The Big Sleep with The Matrix. Thoughtfully produced and long on visual style.” – Film Edge

Mark Wingfield of HK Film News sums it up nicely with “Any modern movie that’s shot in moody, darkly expressive black and white is already after my own heart, and if it’s a smoky noir liberally interwoven with elements of sci-fi, weird fantasy, mind-bending metaphysics, and melancholy romance, then it really stokes my desire to come up with lots of colorful adjectives to describe it.  Writer-director James Kerwin (“Star Trek Continues”) has created just such a cinematic novelty piece in the languidly compelling YESTERDAY WAS A LIE (2009), now celebrating its ten-year anniversary with a digitally remastered Blu-ray release from Indiepix…. YESTERDAY WAS A LIE is painstakingly crafted, seemingly with the same loving care that David Lynch lavished on “Eraserhead” and with much the same stunning visual impact and cerebral engagement.  And although the knotty plot never quite untangles itself before the fadeout, we’re left pleasantly pondering the mysteries of the universe while still buzzing on that beautiful black and white fever dream in which we’ve just been immersed.”