You’re the Enemy: Welcome Back 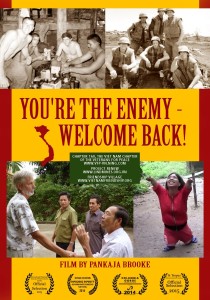 American veterans of the war in Vietnam find resolution and healing by coming back to the place their country devastated, to help heal the legacy of the war.

40 years after the end of the Vietnam war a few brave American veterans returned to the place their country devastated. The amazing forgiveness and optimism of the Vietnamese people as they welcomed these former enemies with open arms is the most potent form of therapy for the Post Traumatic Stress Syndrome and the guilt which made the lives of many veterans so difficult when they returned home.

Nominated for 3 awards at the St. Tropez Film Festival: Best Director of a Short Documentary, Best Production of a Documentary, Jury Award

“3-stars – A sensitive and intelligent film about the continuing legacy of Vietnam. Recommended.” – Video Librarian

“…tells the story of how some brave American Vietnam Veterans have found resolution and healing by coming back to the place their country devastated, to help heal the legacy of the war. Recommended” – OSHO News